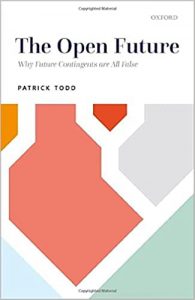 I’m slowly working my way through Patrick Todd’s recently published book The Open Future: Why Future Contingents are All False (Oxford, 2021). I say “slowly” because I’m juggling a few other projects at the moment and want to make sure that I give his book its proper due given the centrality of the topic to my own philosophical interests. I plan to blog through the entirety of Patrick’s book.

Before I dive into chapter 1, I should mention that I know Patrick personally. We met back in 2008 (or 2009?) at a conference at Azusa Pacific University at which I presented a paper on open futurism. A few years later (2010–2011) we shared an office at Notre Dame University during a time when both of us were research fellows there. We haven’t been in close contact since then—he’s now teaching at the University of Edinburgh and I’m working as an academic librarian at a midwestern seminary—but I have a lot of respect for his scholarship. Moreover, our respective views on the openness of the future are very similar. We both defend the position that all representationally determinate (i.e., will / will not) future contingent propositions are false.

Todd’s goal in chapter 1 is to explore how the future might be “open” without it turning out that the past is “open” as well. It would have been helpful here had he used some of the terminology I introduced in my paper on “The Fivefold Openness of the Future”, a paper he doesn’t cite in the bibliography. The terminology is also found in some of the papers he did cite, though. In any case, Todd is mainly interested in what I call the alethic openness of the future (i.e., whether or not there is a unique and complete true story of the future). He takes for granted throughout the book that the future is causally open (i.e., that determinism is false and thus that there are multiple causally possible futures). He also takes for granted that the future is ontically open (i.e., that no unique and complete sequence of future states concretely exists). The question of Todd’s chapter 1 is whether the future can be alethically open without the past also being alethically open given that the future is both causally and ontically open.

As Todd notes, the most common open futurist strategy here is to appeal to some general alethic grounding principle, such as truthmaker maximalism or the closely related idea that truth supervenes on being (TSB). Given such a principle, the argument from a causally and ontically open future to an alethically open future is straightforward:

2. A Worry for Presentism

Todd generates a worry about the above type of argument for alethic openness by focusing on the truthmaker objection to presentism. Before describing the worry, I will say that it’s not entirely clear why Todd chooses to focus on presentism (aside from the fact that he favors presentism over its rivals). All the open futurist needs to argue for alethically open future is (a) causal openness, (b) ontic openness, and (c) an appropriate alethic grounding principle. And ontic openness can be satisfied in at least 3 ways:

All Todd needs for his larger argumentative goals is that one of these ontologies be correct.

In any case, here’s the worry: How can a presentist argue for an alethically open future using an argument like (1)–(5) above without similarly needing to countenance an alethically open past? If presently existing conditions are not sufficient to pick out a unique actual past, then based on TSB the presentist will have to say that both the future and the past are open. But that’s deeply implausible. No one thinks that the past is open. The open futurist wants an asymmetry between past and future: settled past, open future.

As Todd notes, it’s not hard for a presentist to meet this challenge. Among the suggestions he considers is my own proposal in which I argue, following Hartshorne, that God’s presently existing memories are truthmakers for truths about the past. God necessarily remembers the unique actual past exactly as it then was. Presentist who don’t want an explicitly theistic solution to the problem just need to posit that something—perhaps the universe (or multi-verse!) as a whole—necessarily retains past-directed properties that accurately reflect the entire actual past.

But Todd thinks that no strategy of this sort—one that grounds truths about the past in presently existing traces of past events—can work based on the following sort of counterfactual (p. 15):

On the following page (p. 16) he clarifies that he doesn’t really mean to suppose that everything might go out of existence, but rather “everything on which the truth of this proposition could plausibly be thought to supervene.”

Todd finds SBP intuitively plausible and so rejects the presentist strategy of appealing to presently existing traces of past events. What’s his solution then? Here’s where he goes off the rails a bit: Todd suggests that we should reject the general idea that truth supervenes on being, affirm that truths about the past are just “brute”, and instead try to make the case for alethic openness based on a much more specific and targeted grounding idea. I’ll discuss his positive proposal shortly, but first I want to explain why throwing TSB under the bus is the wrong move.

If you are an open futurist who has come to think that there is an irreconcilable conflict between presentism and TSB, which should you give up? I say that unless you already have seemingly decisive grounds for rejecting one or the other, that you should stick with TSB and reject presentism in favor of, say, the growing block theory.

Why favor TSB over presentism (all other things equal)? For one thing, presentism is more controversial. Normally if you run into a conflict between a more controversial claim and a less controversial one, you should stick with the less controversial one—unless you already have other reasons that tip the overall balance the other way. For another thing, TSB is a widely accepted and relatively modest claim about grounding (it’s modest compared with truthmaker maximalism, which is very controversial, but largely for bad reasons). As Todd himself notes (p. 20), “The substantial advantage of arguing for the open future by means of TSB is that has a good claim on being a metaphysically neutral starting point. Indeed, many philosophers who seem to show no interest in arguing for the open future nevertheless are very much attracted to TSB.” In this context Todd’s decision to jettison TSB and take the past as simply brute strikes me as dialectically odd. Why get rid of a highly intuitive position (TSB) in favor of a highly counterintuitive position (the bruteness of truth about the past) to defend a moderately controversial position (presentism) when you’ve got another position (growing block), also moderately controversial, to fall back on?

Furthermore, Todd’s appeal to SBP is problematic in two ways.

First, in the context of Todd’s argument, SBP is not merely a counterfactual but a counterpossible. When it asks us to consider what would happen if all presently existing traces of past events were to go “out of existence” it is asking us to consider something that a presentist trace theorist believes to be metaphysically impossible. Todd himself even uses (p. 15) the phrase “per impossible [sic]” when considering whether God could lose memories or have false memories.

The problem with counterpossibles is that we have no established semantics for evaluating their truth. For mere counterfactuals we have an established procedure: Consider the relevantly closest possible worlds in which the antecedent is true and ask yourself whether the consequent is true in those worlds as well. While there is often uncertainty about just which worlds are relevantly closest and how tightly the circle of relevance or closeness should be drawn, the basic idea is straightforward and not particularly controversial. When we try to evaluate counterpossibles by considering the closest impossible worlds, however, we immediately run into trouble, for the space of impossibilities is so chaotic that it’s hard to be sure of anything anymore. What would happen if down were up, if left were right, if right were wrong, if 2+2 equaled 5, if some triangles had 22.6 sides, if necessarily persistent traces of past events stopped persisting, etc.—you get the idea. It’s not clear how our modal intuitions can function reliably in such contexts. So I don’t think we should put as much stock as Todd does in the seeming plausibility of SBP.

Second, recall Todd’s clarification that SBP is meant to contemplate the non-existence of “everything on which this proposition [i.e., there having been a sea-battle in 2019] could plausibly be thought to supervene.” Todd wants us to consider as presentists that there are no presently existing traces of past events (per impossibile) and he invites us to conclude that truths about the past would still be true regardless. But even if he’s right about that, presently existing traces aren’t the only things on which truths about the past “could plausibly be thought to supervene.” What about the past events themselves? These exist according to the growing block theory. Does Todd want us to suppose that truths about the past would still be true even if neither past events nor presently existing traces of those events exist? When explicitly framed that way, I think SBP is a much harder sell, which tends to confirm my view that if you think TSB undermines presentism then you ought to become a growing blocker, not jettison TSB. Indeed, if we deliberately scrub our ontology of anything that might ground truths about the past, then why should we think that anything about the past is true? Why should we think that there even was a past? Reality in that case would be no different than if the past had never happened and if the present moment were the first instant of time.

Despite Todd’s unnecessary and ill-advised foray into denying TSB in favor of the bruteness of past truth, he does advance a very interesting, and I think rather persuasive, argument that we don’t need anything like TSB to motivate alethic open futurism. Even if (per impossibile!) all broad grounding principles like truthmaker maximalism and TSB are false and even if (per impossibile!) all truths about the past are simply brute, we can still argue for an alethically open future, says Todd.

How so? Here he develops a comparison between truths about fiction and truths about the future. In a fictional world it is plausible to think that only things that are explicitly stated, and things that logically follow from things that are explicitly stated, are true. It is bizarre to suppose, for example, that there must be some determinate fact of the matter as to how much orange juice Harry Potter had for breakfast on some given morning at Hogwarts if the source material on which the fictional Potterverse depends doesn’t specify one way or the other. Likewise, says Todd, it’s bizarre to think that there could be determinate truths about future events if the present facts and causal laws on which the future depends don’t specify those future events one way or the other. As Todd puts it (p.18),

With that, I am very much inclined to agree.